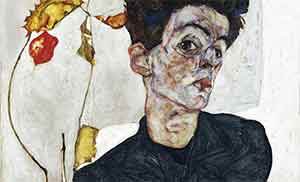 Schiele declared his sympathy for the foreign in a letter: “[…] but in any case, I’m much more partial to the other side, in other words, to our enemies “

One hundred years after the shots of Sarajevo, the Leopold Museum in Vienna  dedicates a compelling exhibition to the fates of Austrian artists during the war years 1914 to 1918. It is an interdisciplinary exhibition which examines the collection from the viewpoint of World War I, places the works of the Leopold Museum into a new context and views the theme from a critical and contemporary perspective.

The comprehensive exhibition, which features some 280 objects, focuses on the fates of Egon Schiele, Albin Egger-Lienz and Anton Kolig. While they only represented a tiny minority among the millions of Austrian soldiers who fought in World War I, their works reflect the sorrowful fate of all soldiers. They also mirror the conflict between executing art to orders from above, for instance from the War Press Office, and creating art from an innermost motivation.   But whether as commissions or out of an inner necessity, these artists created battle scenes, portraits of soldiers,  spontaneous sketches  of everyday life at the front as well as escapist renderings of an idyllic, albeit doomed world.

Main objectives are to  highlight the artistic achievements and the unbroken creative power that prevailed during these dark years,  to show that art was still created despite all the hardships of this time.  “AND YET THERE WAS ART!” alludes to the continuous creation of art during World War I despite the unfavorable conditions. While the exhibition can be interpreted in many ways, it certainly refers to the art market, which continued almost unabated between 1914 and 1918 and showed no signs of stopping: comprehensive exhibitions were organized, commissions placed and the sale of artworks initiated.

A special room is dedicated to illustrating Egon Schiele’s stylistic changes from 1914 in a condensed manner, starting with the work “Blind Mother” (1914) and the geometrizising shapes of the Krumau houses in “Crescent of Houses” all the way to the “Squatting Women” (1918). It  appears as though he now refused to acknowledge the fragility of life as well as the existence of melancholy and death, fear and desperation.”

In 1917 a large-scale exhibition of Austrian art was held in neutral Stockholm. It featured 600 objects, including 240 oil paintings, sculptures and graphic works of the highest quality, which provided an impressive cross-section of Austrian art. Right in the middle of the seemingly endless fighting of World War I, while the Eleventh Battle of the Isonzo was raging on the Southern Front, Austria presented itself at the “Liljevalchs Konsthall” as a peace-loving cultural nation.

The exhibited works range from Kolo Moser’s colorful lovers created around 1914 and Hans Böhler’s reminiscences about his faraway pre-war travels all the way to Herbert Boeckl’s and Oskar Kokoschka’s paintings created immediately after the War. Kokoschka experienced the horrors of war first hand. Having sustained life-threatening injuries several times, he emerged from the battlefields a deeply traumatized man.   All this bitterness and his uncertainty about the future found expression in his epochal work “Self-Portrait, One Hand Touching the Face” (1918/19)”. The painting is an undisputed highlight in the artist’s oeuvre.

Albin Egger-Lienz volunteered for military service in 1915, before Italy’s entry into the War, but was dismissed from active duty soon afterwards due to a heart condition. The fourth version of “Danse Macabre” was created in 1915. Painted on canvas with casein, the work  “Danse Macabre” is characterized by a matt surface, whose fresco-like appearance is no coincidence – although it was to be many years before the artist would meet the challenge of creating actual frescoes.

Egon Schiele was spared direct experiences of the front. Yet he suffered from being a soldier:  “I am a soldier now and have just lived through the hardest 14 days of my life”, he wrote in 1915  about his initial military training.  During his active service, Schiele created portraits of Russian prisoners of war at the Lower Austrian prisoner of war camp in Mühling near  Wieselburg as  well  as of  his superiors. Schiele declared his sympathy for the foreign in a letter: “[…] but in any case, I’m much more partial to the other side, in other words, to our enemies – their countries are much more interesting than ours – freedom actually exists, there – and there are more thinking people than here”. He also harbored pacifist thoughts. In 1917 Schiele was commissioned by the Imperial and Royal Supply Depot for Officers on active service, situated in the Mariahilfer Straße in Vienna, to create drawings of the Konsumanstalt’s offices and warehouses. Towards the end of the War, in March 1918, Schiele celebrated  his greatest success to date. At the 49th exhibition of  the Vienna Secession the large central room of the exhibition hall was dedicated to Schiele’s works. In the autumn of the same year, at the zenith of his career, Schiele died from the Spanish Flu.

“I am painting in great distress”, reported Anton Kolig from the war zone in 1916.  During this time, Kolig primarily painted portraits of officers, but also of prisoners. He realized  that  his works were not suitable to be used for war propaganda.

While some artists created detailed renderings of the horrors of war in the service of Austro-Hungarian war propaganda, art also flourished away from the frontlines.  Kolo Moser created works of intense colors, including “Lovers”, “Venus in the Grotto” as well as “The Wanderer”. Gustav Klimt worked on depictions of women and allegories such as “Death and Life”  during those years. When Klimt died in February 1918, Schiele drew him on his deathbed.

During World War I, the Imperial and Royal Army predominantly fought on the frontlines against Italy, Romania, Russia and Serbia. 100 years on, the Leopold Museum has therefore invited artists from these very countries alongside Austrian artists to present their views of World War I from today’s perspective.  Dmitry Gutov from Russia quotes his “favorite author” Lenin, who turned out to be a pacifist – a TV screen shows Lenin’s criticism of a “reactionary war”. Opposite Gutov’s revolutionary thoughts, the Serbian artist Rasa Todosijevic presents a semi-religious approach to the subject of war in general and World War I in particular. His “Bloody Baptism” shows a cross created with blood-spattered bathtubs. Underneath, a “heap” of suitcases alludes to the Serb‘s Golgotha, to war and displacement, but also to the nation’s resurrection after the War.   Veronika Dreier has created a carpet out of innumerable toy soldiers. With his installation in the museum’s atrium “For God, Emperor and Homeland”, fashioned out of cheap materials and featuring elements borrowed from Habsburg monuments, Franz Kapfer contradicts the so-called “hurrah patriotism” of this time. With his written installation “Sarajevo ’84” on the façade of the Leopold Museum, Marko Lulic invites beholders to ponder the symbolism of words and dates, alluding to the shots fired in Sarajevo in 1914, to the Olympic Games held in 1984, to the city’s occupation in the 1990s as well as to Sarajevo today.

Owing to the rapid technological advances in weapons and warfare, this conflict proved to be more devastating than any previous war. And yet, this period of the “Great War”, with all its misery and confusion, saw   the creation of eminent art.     The entire exhibition under the motto “Never again war!”: “It is an anti-war exhibition, a clamoring plea against war and pointless killing.” 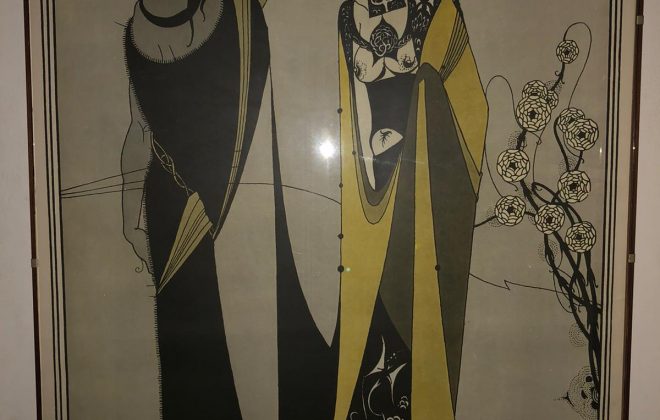