Can We Stop The Heart Disease Epidemic?

Cardiovascular disease is responsible for around 46% of deaths in Malta, of which more than half are due to coronary artery disease (CAD). What is, however, more important is that CAD is the number one cause for potential years of life lost in those under the age of 65 years with 12.8% of all deaths.1

CAD secondary to atherosclerosis is viewed as a disease of developed countries and the characteristic western diets, and is associated with obesity, smoking and lack of exercise. It is also more common in countries having an ageing population, which in itself is a sign of prosperity and associated good healthcare. Notwithstanding these facts, in recent times, we have started experiencing improving rates of age-adjusted cardiovascular mortality in the western world. This is primarily attributed to increased awareness of risk factor modifications for primary prevention, as well as medical advances in treatment. The latter, however, is expensive and less cost effective than primary prevention. In parallel, we are also witnessing an increase in incidence of cardiovascular morbidity and mortality of epidemic proportions in Eastern Europe and the developing countries. From an economic point of view, with the current global economic situation, especially in developing nations, the burden of treatment of cardiovascular disease can overwhelm the already stretched healthcare services.

In the US Centres for Disease Control and Prevention’s report on smoking-attributable disease, it is estimated that smoking causes 1 in 10 of cardiovascular deaths worldwide.2 In the US around a third of cardiovascular deaths in those older than 35 years are thought to be caused by smoking. Western countries have enacted legislation and punitive taxes, as well as educational programmes to try to reduce smoking rates.3 In keeping with this fact, a recent literature review found that smoking reduction alone resulted in a reduction of cardiovascular deaths ranging between 6-56%in various different western countries.4 As tobacco smoking is an addiction, preventing the initial exposure to smoking is the most cost-effective strategy. Campaigns to motivate smokers to quit are not enough, unless one can give support to the quitting decision, as there is clear evidence that quitting rates are much higher when one follows a smoking cessation programme.5 Unfortunately, tobacco companies have shifted their marketing tactics to developing countries with their huge population of young people. They have tapped into their vast resources to fight tooth and nail against any legislation targeting tobacco in poor countries (which do not have the financial means to fight back). To this respect, the assistance offered by billionaire philanthropists, such as Bill Gates and Michael Bloomberg, to these countries has been most opportune.

Changes in diet and the ensuing metabolic diseases are thought to be a major contributor to cardiovascular disease in both the developed and developing world. The prevalence of diabetes, hyperlipidaemias and obesity has increased dramatically in societies as their dietary habits changed with different economic realities. A higher fat and refined carbohydrate content in food, coupled with an increasingly sedentary lifestyle, has produced a metabolic substrate for atherosclerosis in different racial groups. Despite the fact that different races have different genetic susceptibilities to CAD, diet plays a very important role. The proof of this is the French paradox (with the decreased incidence of CAD when compared to their neighbours despite racial similarities), and increased incidence of CAD in Asian immigrants as they adopt their host country’s diet.

Changing dietary habits is extremely difficult. Food is not merely a source of nourishment, but has several psychosocial facets, which is inherently ingrained in our society. It gives us pleasure, comforts us and makes us feel good. Tastes are acquired early on in childhood, and what gives comfort to a Chinese person might not have the same effect on us. To add to that, multi-billion dollar companies are constantly competing with each other to maximise profits and get consumers to buy their food with their aggressive marketing campaigns. Research has shown that it is only through the release of dopamine into the pleasure centres in the brain by high quantities of sugar, salt, and unsaturated fats that customers keep buying the same products again and again. Would the marketing efforts of fast food chains have the same effect if they exclusively sold unflavoured water and salads?

Decades of research by the medical community on dietary habits have produced great awareness throughout the western population. However, this has not been matched with legislative efforts by politicians, as has happened with reasonable success with tobacco. Unfortunately, marketing and labelling of food products can be misleading and is poorly controlled. Taxation of unhealthy food, and restriction of advertising is being proposed in several countries, but this is very complex to legislate as food products are very heterogeneous and loopholes are easily found.

Locally, there is widespread awareness of the importance of serum lipid levels and the associated cardiovascular risk, and checking one’s cholesterol levels is popular with health conscious individuals. When dietary modification and exercise is not enough, statin therapy has proven to be highly effective in reducing the risk of atherosclerotic disease with a relatively favourable benefit-risk ratio. Choosing whom to give statins to for primary prevention has become a topic of great debate and research.

High blood pressure is an important factor in the development of acquired cardiovascular disease, especially stroke.6 High levels of salt in processed food is thought to be the main cause of essential hypertension in western societies. Tribes with practically no hypertension incidence have ended up with extremely high rates in a single generation as soon as they were exposed to processed food. The pharmaceutical industry has invested billions of dollars in coming up with a wide variety of effective anti-hypertensive agents. The recently published SPRINT trial has shown that lowering target systolic blood pressure to below 120 mmHg rather than 140mmHg halved the risk of death from cardiovascular disease.7 The principal challenge with hypertension is not the lack of appropriate treatment, but the large proportion of undiagnosed or undertreated hypertensive patients in the general population.

An increasingly sedentary lifestyle and lack of regular exercise is a well-known problem of the modern world. Most et al have reported that there is a reverse J-shaped relationship between leisure time physical activity and cardiovascular mortality, thus recommending a moderate amount of weekly exercise.8 Once again, although exercise is  regularly recommended by doctors, what is most needed is political action. Sports and exercise should be a priority in our education system, and not just an afterthought. An infrastructure to promote walking, cycling and other physical activity is sorely needed locally.

Premature deaths have considerable social and economic effects on society. The fact that its largest contributor, cardiovascular disease, is potentially avoidable makes this disease worth investing in with respect to time and money. Physicians currently limit their role to treating patients who come to them worried about their symptoms, or advising patients who are aware of the need for primary prevention. Unfortunately, persons who do not actively seek doctors for primary prevention are usually the ones who lead an unhealthy lifestyle and have the highest risk. It is saddening and equally surprising when the author meets second-generation arteriopaths, who have had 20 years to stop smoking and correct their cholesterol levels, only for the tragedy of the death of a young father to be repeated again with the son.

Our current healthcare system does not actively promote primary prevention for heart disease. A system similar to breast and colon cancer screening is feasible without the need of sophisticated and expensive equipment. The nurse-led Cardiac Rehabilitation Unit at Mater Dei Hospital is very effective for secondary prevention, and the response by patients has been overwhelming. A similar approach should be adopted for primary prevention of the whole general population. High-risk families and individuals should be easy to identify. Once this cohort is identified by qualified nurses, lifestyle advice can be given and if need be, these can be referred to physicians for any necessary medical management. Furthermore, IT systems can help standardise processes, and monitor the success or otherwise of any risk factor modifications.

Healthcare professionals should also be on the frontline, lobbying politicians to further educate children and help improve the health of our society. What children eat throughout their childhood will impinge on their future health status. In view of this fact, the government must be especially proactive in promoting healthy nutrition for its younger generations. Teenage smoking is also another aspect government should tackle; it is too easy for 16 year olds to come across cigarettes. Unfortunately, our politicians tend to overlook the future, so it is up to doctors and health care professionals to work tirelessly for those necessary changes which will eventually make early cardiovascular deaths a rare occurrence. 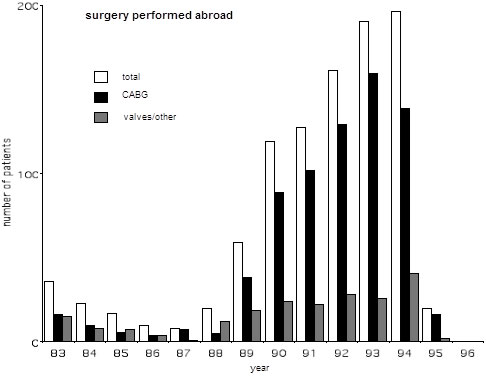 Cardiac surgery in Malta: past, present and future

The Decline and Fall of the Sacra Infermeria