Home > TheSynapse Online > Library > Contributions > How to invent Impressionism , how to invent the new art…do you know the history ? 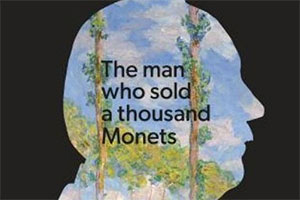 Impressionism is now one on painting’s best -loved movements, yet it produced some of the most controversial images of its time. It owes much of its global success to the endeavours of one man: Parisian art dealer Paul Durand-Ruel ( 1831 – 1922 ). From the late 1660s to hi retirement in 1913, Durand-Ruel championed painters whose works had been shunned by the art establishment and which had little hope of being seen. From the landscapes of the Barbizon School to the new generation of painters who became known as the Impressionists, Durand-Ruel was persistent in his efforts  to exhibit and create new markets for artists rejected elsewhere. At the same time, he can also be credited with inventing the profession of the modern art dealer, setting up an international network of galleries and introducing practices we now accept as standard, such as gallery lectures, illustrated art reviews and solo exhibitions.
We can learn a lot from the impressive “ Inventing Impressionism “ at the National Gallery in London !!

Paul Durand-Ruel made little distinction between his business and personal life, The art he championed in public was also the art he loved in private. He filled his apartment on the rue de Rome in Paris with works by artists he represented, most notably Renoir and Monet.  The collection was so comprehensive that it served as the basis for one of the first histories of Impressionism, published in 1892.

Family was also key to Durand-Ruel’s business practice. Himself the son of an art dealer, he raised his sons and grandchildren to help expand the firm.  He also treated his artists as family and, despite being a political conservative and a monarchist, gave them moral and financial support whatever their ideas and religious beliefs.  Renoir, a particular friend and the most celebrated portraitist of the Impressionists, was the artist Durand-Ruel chose to paint his own portrait and those of his children.

In 1870, a series of events set Durand.Ruel on a new path.  In September, two month after France had declared war to Prussia, he sent a large part of his stock to the safety of London. He followed shortly after, and by the end of the year had opened a gallery on New Bond Street where he hel regular exhibitions.

London also provide Durand-Ruel with a life-changing meeting, being introduced to two young painters also taking refuge in the city: Claude Monet and Camille Pissarro.  Both artists were painting directly from nature , in a way similar to Durand-Ruel’s beloved “School of 1830”.  But both also displayed a commitment to modern subject matter that was daring and new.  Durand-Ruel immediately began to buy and exhibit their pictures.

In January 1872, back from London and his encounter with Monet and Pissarro, he came across two Manets, The Salmon and Moonlight at the Port of Boulogne, at another artist’s house. He bought them on the spot and immediately set out to acquire as many Manet’s as he could.  All the pictures displayed at this exhibition were purchased that month.  A visit to Manet’s studio resulted in the spectacular block purchase of 23 canvases for 35,000 francs ( nearly 40 times the average French worker’s annual wage. With no established market for the artist, it was a huge gamble.  In the same 1872, he began to invest heavily in what would soon be referred to as the “ new painting “ .  Although he generally paid small sums for pictures, he bought in bulk. He paid his artists monthly salaries against future work, sometimes settled their and always gave them moral support. Above all, he offered the backing of what now an established name in contemporary art with publications, exhibition venues and a growing international profile.

In the early 1880s, coming out of financial banks difficulties, Durand-Ruel was again buying Impressionist artworks.  In 1883 he confirmed his position as the premier dealer of the group by staging a series on month-long, solo exhibitions: Boudin, Monet, Renoir, Pissarro and Sisley. This type of show, now standard across the world, was then rarely staged and held mostly to commemorate dead artists.  Taking Monet’s 1883 show as a case study, the extent to which he invented the modern monographic exhibition is revealed. He ensured it was a retrospective, demonstrating a logical progression towards Monet’s most recent output.  He ran and advertising campaign, supplied reproductions to the press and staged a lavish private view.. In  1892, when Monet was painting in series, Durand-Ruel’s solo exhibition format played a key role in the artist’s plans, allowing Monet to display his works together before they were divided among collectors.

Another banking crash  meant that by 1884 Durand-Ruel was again on the brink of ruin. This time, however, it was a concerted effort to expand into foreign markets that changed not only his personal fortunes, but those of the Impressionists as well. In 1886, he travelled to New York with almost 300 pictures to mount Works in Oil and Pastel by the Impressionsuts of Paris.  The show was a critical and commercial success. By 1888, he had opened a permanent gallery in New York and, assisted by his sons, became the go-to-man for wealthy American collectors who were happy to pay increasingly significant sum for the new art.

In 1905, Durand-Ruel organised an exhibition at the Grafton Galleries in London that remain the largest and finest exhibition of Impressionist painting ever held.  With  315 works, including 196 from his private collection, the show was his bid to finally crack the British market. The show was also significant as an early example of exhibition curation.  His selection established a history for the movement and included masterpieces by Manet and the Impressionist forerunner Boudin, as well as pictures from all periods of work by Degas, Monet, Morisot, Pissarro, Renoir and Sisley.  The exhibition attracted great crowds and widespread critical interest. And despite tha fact that only 13 works were sold, the story of Impressionism Durand-Ruel established had far-reaching influence. It became the accepted history of the birth of modern art as we know it today.

Michelangelo and Sebastiano: a teaching and learning team