Clinical assessment offers little to as aid the diagnosis of RIF pain. With developements in ultrasound (US) and both spiral and multidetector computed tomography (CT), an accurate diagnosis can be made and unnecessary surgery and pontentially lethal complications may be avoided.

The most common cause of RIF pain presenting in the emergency room is acute appendicitis. This situation has been extensively studied and there is clear evidence the cross-sectional imaging with ultrasound and particularly multidetector CT has significantly reduced unnecessary surgery and shortened hospital stays of patients presenting this complaint (Figure 1). Although CT is more accurate in the diagnosis of acute appendicitis, ultrasound is preferred in children under 14 years of age and in pregnant women in order to avoid unnecessary radiation exposure (Figure 2). US findings include a fluid containing appendix with a diameter greater than 7mm. Tenderness may be noted during compression with the ultrasound probe. If the appendix is not visualised on US, it is either normal or in a retrocaecal location. CT shows again a thickened appendix that is fluid filled with linear infiltration or “stranding” of surrounding fat. An inflammed retrocaecal appendix is best diagnosed with CT. Complications such as perforation and abscess formation are detected by both modalities but are better visualised with CT (Figure 3).

Inflammatory bowel disease closely mimics appendicitis and is a common cause of RIF pain. Crohn’s disease in particular has a predeliction for the terminal ilium and caecum. Ulcerative colitis (UC) is seen mainly in the distal colon, however extensive disease affecting all the colon will affect the caecum and distal ileum (“backwash iliitis”). The main features of Crohn’s disease on CT are bowel wall thickening and contrast enhancement (Figure 4). Complications of Crohn’s disease include instestinal stenosis, obstruction, sinus and fistula formation with other intestinal loops, the bladder and the vagina, and abscess formation (Figure 5). These are not seen in UC due to the fact that the inflammatory process is essentially mucosal in UC (Figure 6), but involves all bowel wall layers in Crohn’s disease. Patchy bowel involvement will also help distinguish Crohn’s disease from UC, since UC involves the bowel in a contiguous fashion.

The extent of Crohn’s disease has in the past been assessed by barium sulphate X-ray studies. These studies rely on transmission of barium sulphate as a contrast agent accompanied by a bulking agent such as lactulose to obtain double contrast images of the small bowel. This technique depicts the luminal side of the bowel, but cannot assess the extent of transmural involvement, mesenteric infiltration and abscess formation. Extraluminal features of Crohn’s disease are best seen with CT. Engorgement of the vasa recta as they penetrate the bowel wall (the comb sign) (Figure 7) and fat proliferation in the bowel wall at the mesenteric border (the creeping fat sign) (Figure 8) are features of        active and chronic disease activity respectively. Mesenteric lymph node involvement is also seen on CT.

Infectious ilio-colitis is a common cause acute RIF pain that may be clinically indistinguishable from acute appendicitis. More common causal bacteria include Yersinia enterocolitica, Campylobacter jejuni, and Salmonella enteritidis. Most cases are self limiting and do not require imaging, but prolonged or severe symptoms may lead to imaging to exclude alternative diagnoses. CT features are non-specific and include circumferential wall thickening of the terminal ileum and caecum with homogeneous enhancement and adjacent mesenteric lymphadenopathy (Figure 9).

Neutropaenic colotis (or Typhlitis) presents with acute RIF pain, diarrhoea, fever and features of peritonitis. This condition is seen in neutropaenic patients undergoing chemotherapy for malignancy, such as acute leukemia, and has also been associated with other immunosuppressive conditions and post-transplantation states. The mechanism of this disease is not completely clear, but it involves intestinal mucosal damage that can rapidly progress to perforation due to a combination of infection, ischemia, hemorrhage, and even neoplastic infiltration. CT is the study of choice for diagnosis of typhlitis owing to the risk of bowel perforation with colonoscopy or contrast enema examination. It typically involves the right colon, but the ileum and transverse colon may also be involved. CT features include caecal distention, circumferential wall thickening with areas of low attenuation secondary to oedema or necrosis, and inflammatory stranding of the adjacent mesenteric fat (Figure 10). RIF pain in an immune compromised individual should always prompt typhlitis as the most likely diagnosis.

Colonic diverticulitis typically affects the sigmoid colon, however involvement of the ascending colon is not uncommon and the possibility of it causing RIF pain should always be considered. CT features consist of asymmetric or circumferential colonic wall thickening associated with focal pericolic fat stranding. CT confirms the presence of diverticular disease in other portions of the colon and also complications including perforation and abscess formation (Figure 11).

RIF malignancies such as adenocarcinoma, lymphoma, gastrointestinal stromal tumor, or metastasis, may cause pain especially in the event of a complication, such as perforation or abscess. Differentiation between an acute inflammatory condition and malignancy at CT is not always an easy task, since findings may overlap (Figure 12). A very long segment of involved bowel and extensive extramural fat infiltration especially if excessive in view of size of the bowel lesion are more suggestive of benign disease. A circumscribed mass with a “shouldered” margin bordering on normal bowel and large mesenteric lymph nodes are more indicative of malignancy.

Conditions relating to the epiploic appendages, the mesentry and the omentum may also cause acute RIF pain.

The epiploic appendages are peritoneal pouches containing fat with central vessels located at the antimesenteric border of the colon. They are more numerous in the sigmoid and descending colon. Epiploic appendagitis occurs due to torsion of the appendage or inflammation of the adjacent bowel and is the result of ischaemia or venous thrombosis. These conditions are self-limiting requiring no intervention and pose no significant threat. Normal epiploic appendages are not visible on CT, but with appendagitis there is infiltration of surrounding normal peritoneal fat and enhacement of the central vessels (Figure 13).

Omental infarction is caused by interruption of blood supply to the omentum due to torsion or venous thrombosis. Idiopathic infarction is usually precipitated by coughing, straining particularly after excessive exercise, or overeating. Secondary infarction occurs from vascular damage related to trauma, surgery, hernia, or adhesion. This presents with infiltration of the greater omentum, which is located deep to the anterior abdominal wall below the transverse colon (Figure 14).

Primary mesenteric adenitis is defined as the presence of a cluster of more than three right-sided lymph nodes in the small bowel mesentery or anterior to the psoas muscle, usually larger than 5 mm, without an identifiable acute inflammatory condition. It is thought to be related to infection of the terminal ileum (possibly viral) and is seen mostly in children (Figure 15).

Endometriosis, defined as the presence of endometrial tissue outside the uterine cavity and myometrium, is a common disorder in women of childbearing age and is often associated with chronic pelvic pain and infertility. However acute episodes of pain are frequent particularly around mensus due to accumulation of menstrual fluid within the deposits. These deposits occur most frequently around the ovaries and uterus, but may occur anywhere within the abdomen (Figure 16).

Intussusception is rare in adults, accounting for 5% of reported cases. In children, most cases are idiopathic,  while in adults many cases are secondary invagination of a benign or malignant neoplasm (eg, lipoma, leiomyoma, adenomatous polyp, lymphoma, and metastasis). Intusussception occurs most commonly at the ilio-caecal junction and ascending colon. A characteristic target shaped appearance is seen on CT, which centrally is composed of hypodense (dark) invaginated mesentry surrounded by the invaginated bowel (intusussceptum) and containing bowel wall (intususscipiens) (Figure 17). Alternating hypo and hyperdense rings seen on CT are due to layers of enhancing mucosa and oedematous submucosal tissue.

Caecal volvulus is a rare condition that occurs due to a congenital abnormally mobile caecum, which can twist along its long axis resulting in a closed-loop obstruction and bowel ischaemia. A distended caecum that may lie in the RIF or fold over into the left upper abdominal quadrant is seen on CT along with a swirl of mesenteric vessels leading to that segment of bowel (Figure 18).

Ischaemic colitis more commonly involves the left half of the colon, but it may also involve the caecum and ascending colon particularly in older patients with severe atheromatous disease and with episodes of severe hypotension. Left sided ischaemic colitis usually presents with rectal bleeding and is therefore diagnosed earlier, while right ischaemic colitis presents only with intermittent pain and possibly some constipation and hence has a higher mortality due to late diagnosis. CT features of right ischaemic colitis include a distended caecum and marked wall thickening of the ischaemic loop (Figure 19). Pneumatosis coli and pneumoperitoneum indicate mural necrosis and colonic perforation.

In summary, spiral and multidetector CT and ultrasound can provide vital information for the investigation of RIF pain. In many cases, surgery may be avoided, while in others potentially a life-saving surgical procedure may performed without delay. 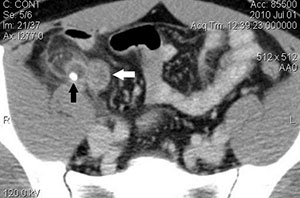 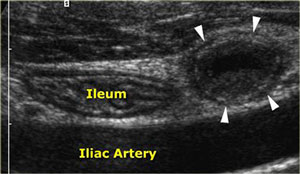 Figure 2.  US shows a thickened distended appendix (arrowheads) confirming acute appendicitis as well as a normal terminal ileum both lying in front of the common iliac artery. 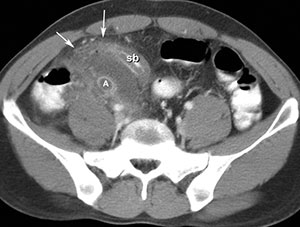 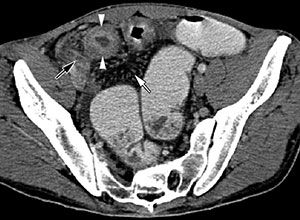 Figure 4. Wall thickening and enhacement seen in the terminal ileum (arrowheads and black arrow) and mesenteric infiltration (white arrow) in a patient with Crohn’s disease. 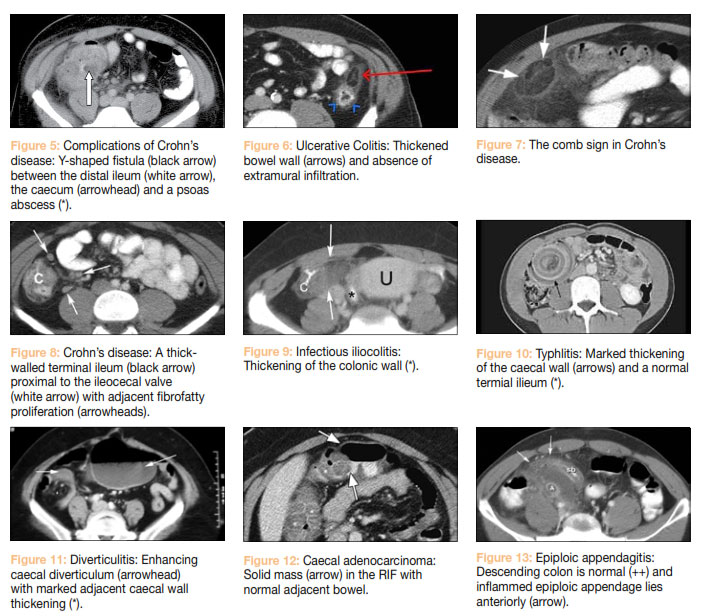 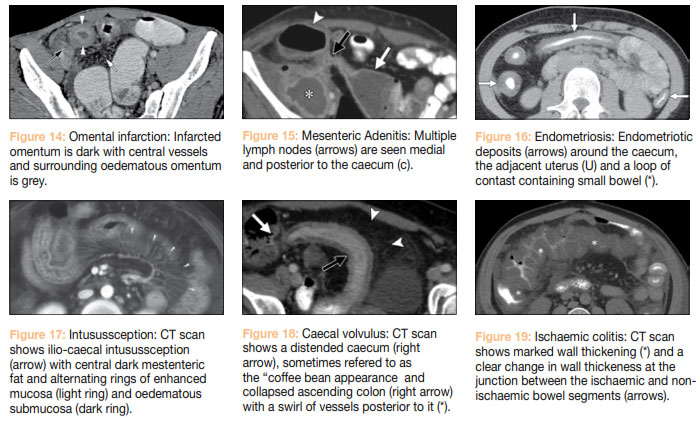 Two Synapse Anniversaries in a row (and a birth)