The student’s perception of their role in research and development

Medical undergraduates are often too focused on their studies and disregard the importance of Medical Research and Audit both for their own personal development and also for the benefit of the general medical community. This is probably due to the lack of exposure and understanding of what being involved in such projects truly entails. Some view it as a waste of time, others see it as beyond their expertise while others don’t know where to start. This review on the topic is aimed at giving a general introduction to medical research, the pros and cons of getting involved and how any student should get started.

Introduction to Medical Research and Audit

Medical research is aimed at discovering or compiling information by  applying scientific methods of collecting new data (primary research) or compiling data from already existing research (secondary research). Research can then be presented in various ways. Case-reports and literature reviews are the least demanding forms of information dissemination in the scientific community. Case reports involve briefly discussing strange or peculiar cases whereas a literature review involves compiling information from various sources about a particular topic of interest. Letters or commentary articles briefly describe important current research findings, which would be considered for fast publication. Clinical Papers constitute research studies on normal individuals or patients with the aim of obtaining new data to negate or approve a hypothesis, thereby occupying the top category in the hierarchical ladder of medical evidence.  Information may also be published in the form of an audit where existing medical practice is compared with the current recommended evidenced-based management.

Importance of Research/Auditing as Doctors and Medical Students

The author considers the medical profession as a journey where skills and knowledge are acquired through practice, experience and interaction with other colleagues. Research has a very important role to play in this since it helps undergraduates, from an early stage, to think systematically and logically, along with the development of new intrapersonal skills including determination, time management and discipline. It also exposes students to important ethical principles earlier on in their career, something often lacking in practice at undergraduate level.  A simple case report or literature review possibly allows a ‘beginner’ in the research and auditing sector to have his name published and give that extra edge to their curriculum vitae which is something employers often look out for.

The actual process of carrying out research is where students are often misled in thinking that it’s impossible to accomplish, or that it’s beyond the individual’s abilities. On the contrary, myriad options allow any individual to delve into areas of medicine which may interest him/her, with a central focus on curiosity rather than on an exam-passing orientation. Publishing and presenting papers in journals or conferences should be regarded as a step-wise process whereby students develop and enhance paper writing skills together with medical and statistical knowledge. Through writing up his/her own work, a student can learn to appreciate published medical evidence in terms of analysing the clinical relevance and reliability of any publication. During this process students can start to perceive articles not as a burden, but as a resource for gaining knowledge before and after graduation by contributing to life-long learning for the benefit of future patients, as stated by the General Medical Council’s guidelines Tomorrow’s Doctors where graduating medical students must be able to “evaluate and integrate evidence critically’’ 1 where they can begin to develop the roots of lifelong learning.

Getting involved in research should follow a number of steps so that the work is both excellent in quality and also self-fulfilling: the 3 W Scheme should get any student started – When, What and Why, shown in Figure 1. 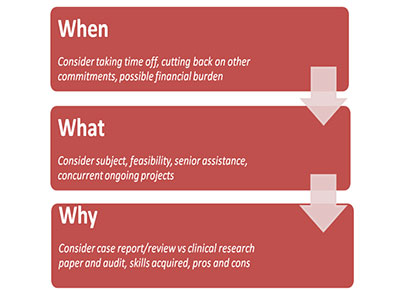 Research takes up a substantial amount of time depending on whether you are planning to do a case report or else a large scale clinical study. One might consider taking time off from studies or else cutting back on other commitments in order to achieve the objective and still perform well academically; after all, passing exams is essential to start practicing the medical profession. Therefore the ‘when’ factor should be thought over carefully, considering that an element of financial burden might be present. Obviously, starting a large scale research project in your final year is not a good idea.

The ‘what’ is probably the most important factor in providing the self-satisfaction that everyone wants after all the hard work. One should identify an interesting and realistic subject in order to kick off the work. At this point, one might consider seeking help from senior doctors so as to add previous knowledge and value to your work. Suggestions from more experienced individuals in the field might be beneficial both for the content of the work and also in the complexity of the study (typically with external points of contact and possibly some financial backing from sponsors). Even if you don’t find a particular subject on which to focus, one can always look out for ongoing studies and enquire about the possibility of working within the research team.

The reason ‘why’ you want to perform this work should deliberate whether you want to publish a case report or literature review, or else an original medical research paper. A student’s role would depend on the type of research; in a case report, a student would probably be in charge of writing up the preliminary case report, whilst in a literature review the main task would be a comprehensive summary of multiple papers on the particular subject. On the other hand, the tasks involved in an original clinical paper are much more variable; contacting study participants, gaining consent, lab work, logistical preparations for performing the necessary methodology, drafting up documents for financial funding and ethics committee approval, just to name a few. The involvement of senior professionals would include proposing the hypothesis and possibly the methodology along with discussion and interpretation of the results. As regards to audits, one may want to perform an internal audit on a specific aspect in primary, secondary or tertiary care, with the purpose of comparing current practice to guidelines (local or international) or evidence-based findings. As students, tasks in setting up an audit would include logistical preparations for the audit, data inputting and subsequent pooling and possibly statistical analysis.

As undergraduates possess certain limitations, the best way to start is through literature reviews, case reports or audits. Case reports are fundamental to the sharing of knowledge of one-off previously unrecognized cases amongst professionals across the world, one notable example being the enigmatic Multiple Myeloma.2 More recently, a rare non-ischemic stress-induced Cardiomyopathy known as Takotsubo Cardiomyopathy has been recognized as a totally new disease entity, comprising specific features, all thanks to case reports from all over the world. Initially thought to just inflict Japanese citizens, multiple case reports from around the world have denied the previous suggestion.3 Having said this, case reports are nowadays considered as appealing only to the specialised few, providing little benefit to everyday medical practice. Their scope lacks the scientific importance that is associated with the large conducted studies. However, case reports help students develop academic writing skills, learning how to submit and revise an article, all skills worth developing for future research projects.2 Above all, a student who has not yet graduated can be happy with his/her small contribution to medical science. With time, one should aim at achieving higher targets, slowly working at climbing up the medical evidence ladder.

What is on for October for the Health Promotion and Disease prevention Directorate?

There are more things in Obstetrics and Gynaecology, Horatio, than are dreamt of in your Philosophy – Part I