Stomach (or gastric) cancer is one of the leading causes of cancer mortality worldwide. Complete resection of a gastric tumour and adjacent lymph nodes represents the only potentially curative intervention.

Spiral Computed tomography (CT) with optimal contrast enhancement and multiplanar reformatting has remained the modality of choice for the preoperative staging of gastric cancer and for follow-up. However, CT may be limited in the identification of metastases in non-enlarged lymph nodes, peritoneal dissemination, and distant blood-borne metastases.

Although CT is reliable in detecting metastases to most locations such as the liver, lungs, adrenal glands and ovaries, FDG PET may play a role in the detection of metastases to the skeleton and to unexpected locations. In addition, FDG PET is useful in distinguishing areas of active cell growth from areas of scar tissue within CT-detected residual tumour following therapy.

Cancerous invasion of the gastric wall as visualized at CT has been classified as follows: In T1 and T2 lesions, invasion is limited to the gastric wall, whose outer border may be smooth (Fig 1a, 1b    ); in T3 lesions, the serosal contour becomes blurred with  strand-like areas of increased attenuation extending into the perigastric fat (  Fig 1c   ); and in T4 lesions, tumor spread frequently occurs via ligamentous and peritoneal reflections to the colon (Fig 1d), pancreas or liver. Differentiation between T3 and T4 lesions is particularly important because extensive invasion of T4 lesions into adjacent structures makes surgery difficult or impossible. PET FDG is not helpful in T staging.

At CT, cancerous nodes are identified on the basis of size, shape, and enhancement pattern (ie, more than 8–10 mm along the short axis, nearly round shape, central necrosis, and marked or heterogeneous enhancement). In addition, CT can provide anatomic information about metastatic nodes (Fig 3a      ). Nodal assessment of compartments III and IV is particularly important because the metastatic nodes of stations 12–16 (M1 nodes) cannot be removed with routine D2 dissection. However, CT has a major limitation in that it cannot detect metastases in normal-size nodes; FDG PET can demonstrate increased activity in such nodes (Fig 3b).

FDG PET may detect metastatic deposits in non-enlarged lymph node, but is less sensitive than CT in the detection of lymph node metastasis in compartments I-II. This is mainly due to poor spatial resolution of FDG PET, which cannot separate compartment I-II lymph nodes from the primary tumour due to close proximity (Fig 4). However, the presence of metastatic compartment I-II lymph nodes may not be important in planning surgery, since these nodes would be normally be removed by D2 surgery. Detection of lymph node metastases in compartments III-IV can change the extent of lymph node dissection or may preclude unnecessary surgery. Metastases at these sites would be easier to identify at PET because they are located away from the primary lesion.

Solid organ metastasis is uncommon in primary gastric cancers at the time of initial diagnosis, but its detection is important in treatment planning. Hematogenous metastases from gastric carcinoma most commonly involve the liver because the stomach is drained by the portal vein (Fig 5   ). Other less common sites of hematogenous spread include the lungs, adrenal glands, and skeleton. In the case of ovarian metastasis (Krukenberg tumor), three possible pathways have been considered: peritoneal dissemination, lymphatic spread, and hematogenous spread. CT readily detects distant solid organ metastasis. Peritoneal metastases are also readily seen by CT, while FDG PET is helpful when CT is equivocal.

CT is the imaging modality of choice for the preoperative staging of gastric cancer and the follow-up of affected patients. FDG PET is a useful adjunct for the detection of distant metastases and metastases in non-enlarged lymph nodes. In addition, FDG PET may play a valuable role in distinguishing residual cancer from scar tissue after therapy.

Figure 3.  Station 7 and 8 lymph node metastases in a 63-year-old man with stomach cancer. 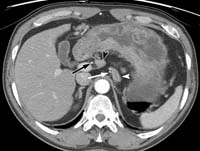 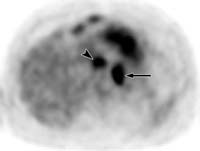 (a) Axial CT scan demonstrates an enlarged lymph node (arrowhead) in the hepatoduodenal ligament adjacent to the proper hepatic artery (arrow), which are barely visible on axial PET scans (b).

Update on Avian Influenza in 2006