Ectopic pregnancy is defined as the presence of a gestational sac outside the uterine cavity and has a prevalence of approximately 2%. Ninety-five percent of ectopic pregnancies occur in the non-interstitial portion of the fallopian tube (infundibulum, ampulla or isthmus) (Fig 1). The main presenting features of an ectopic gestation are vaginal bleeding and abdominal/pelvic pain occurring during the first trimester of pregnancy; a prevalence of ectopic pregnancy of up to 18% has been reported for women presenting with these symptoms. Transvaginal Ultrasound (TVUS) combined with serial measurement of serum Human Chorionic Gonadotrophin (HCG) are the tools used for the diagnosis and management of ectopic pregnancy.

The possible locations of an ectopic pregnancy follow the normal course of the developing oocyte / fertilised ovum starting in the ovary, followed by release into the peritoneal cavity through ovulation and subsequent transit through the fallopian tube to reach the uterine cavity. In addition, an ectopic pregnancy may occur in the cervix or in a caesarean scar.

There are no reliable findings on pelvic ultrasound during the first 5 weeks of gestation. At 5 weeks gestational age, a 2-3mm gestational sac is generally seen in the endometrial lining of the uterus (Fig 2); the endometrial lining during gestation is known as the decidua and the presence a sac within it is called the intradecidual sac sign. At 5.5 weeks, a yolk sack appears (Fig 3). At 6 weeks, a 10mm gestational sac, a foetal pole and cardiac pulsations are generally evident (Fig 4). If none of these findings are present in a patient with a positive pregnancy test, serial Beta HCG testing and a repeat ultrasound in 7 days are indicated until the location of the pregnancy is identified.

Decidual cysts are the result of degeneration of decidual cells producing a thin walled, fluid filled cavity (Fig 6). A decidual cyst is located at the myometrial/endometrial junction in early first trimester pregnancy, which contrasts with a pseudogestational sac that lies centrally within the endometrium. Decidual sacs may occur in intrauterine and extrauterine pregnancies and in non-pregnant women. They may also occur centrally within the placenta in later pregnancy frequently close to the point of cord attachment; they are only of concern when measuring >3cm in diameter, when they must be distinguished from villous infarcts.

To safeguard a possible wanted pregnancy, the Society of Radiologists in Ultrasound established criteria in 2013 for a nonviable first trimester pregnancy. Primarily they state that any round or oval fluid collection in a woman with a positive pregnancy test result is most likely, and should be reported as, an intrauterine pregnancy. Findings indicative of a non-viable pregnancy include (1) an embryonic crown-to-rump length ≥7mm and no heartbeat, (2) a mean gestational sac diameter of 25mm and no embryo, (3) absence of a heartbeat ≥2 weeks after detection of a decidual sac (4) absence of a heartbeat ≥11 days after detection of a decidual sac containing a yolk sac. These criteria may also be used to identify a pseudogestational sac in the presence of a rising beta HCG level.

Risk factors for developing an ectopic pregnancy include a previous ectopic gestation, prior tubal surgery or ligation, a prior caesarean section, previous myometrial or endometrial surgery, in vitro fertilisation, a history of endometriosis, the presence of an intrauterine contraceptive device, pelvic inflammatory disease, congenital uterine anomalies (may occur with a history of intrauterine diethylstilboestriol exposure) and smoking.

The most specific (100% specificity) for an extrauterine pregnancy is the finding of an extraovarian mass containing a sac with a live embryo (with heartbeat), however this is rarely seen. More commonly a tubal ectopic pregnancy presents on TVUS as an extra ovarian extrauterine mass containing a gestational sac surrounded by an echogenic ring (Fig 8); there is increasing specificity if a yolk sac, embryo and a heartbeat are present. Increased vascularity around the sac on Doppler ultrasound (known as the Ring-of-Fire sign) and the presence of small amount of ascites are not reliable signs. The presence of more abundant peritoneal fluid containing blood components is a more reliable sign of an ectopic gestation.

Cervical pregnancies occur about 3-4 times more frequently following vitro fertilisation treatment than in normally conceived pregnancies. The gestational sac is usually located in the proximal cervical canal (Fig 10) and must be distinguished from a spontaneous abortion in progress. On TVUS, pressure applied on the cervix by the endovaginal probe results in a sliding movement of the gestational up and down the cervical canal in the case of an abortion in progress. This movement is absent in a cervical ectopic pregnancy.

Heterotopic pregnancies are multiple pregnancies that occur simultaneously in both an intrauterine and an ectopic location (Fig 11). These are most commonly seen in women receiving assisted reproductive treatments. In such cases, the ectopic gestation sac may be treated with laparoscopic removal or image-guided ablation.

Understanding the imaging findings in women with ectopic pregnancies is crucial as it helps guide early management. The risk of incorrect diagnosis of an ectopic pregnancy are high and may result in maternal exsanguination and death. 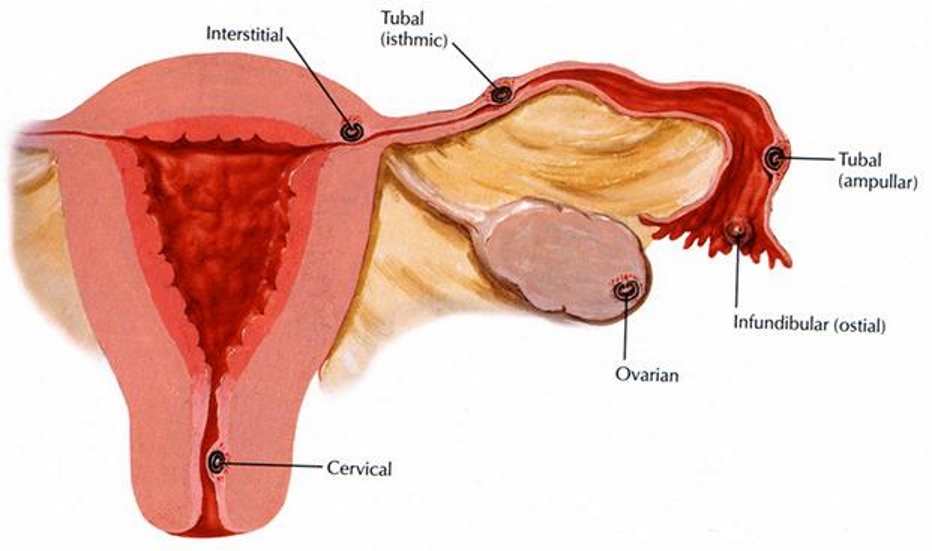 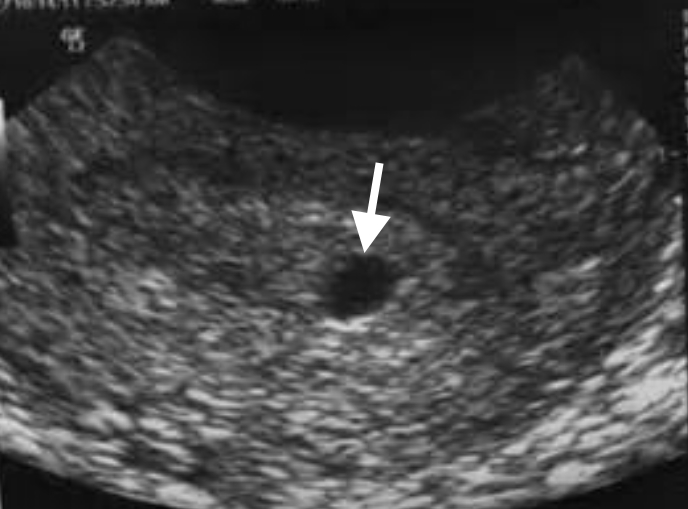 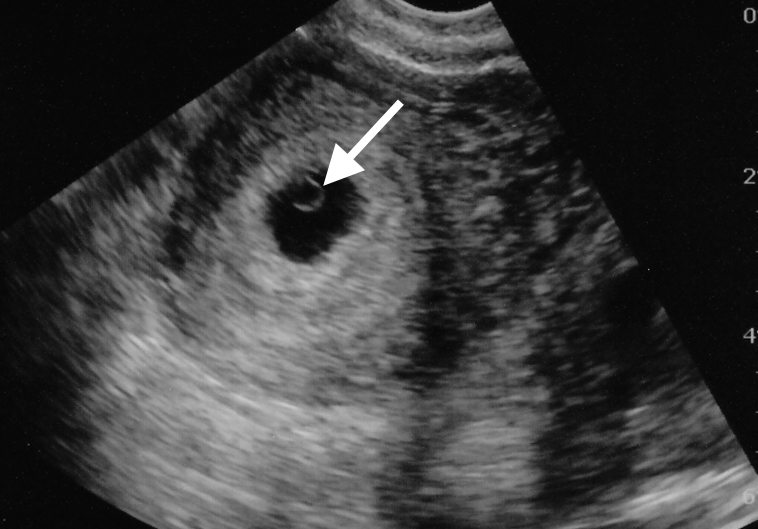 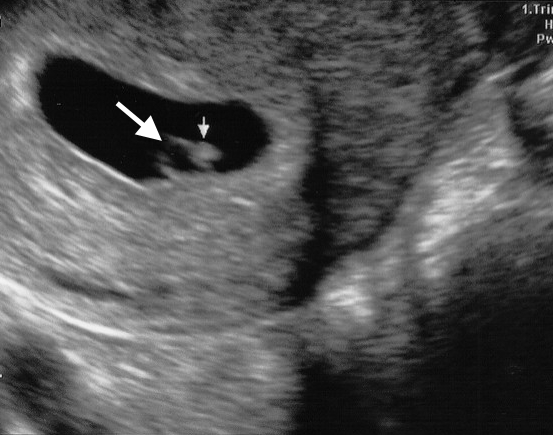 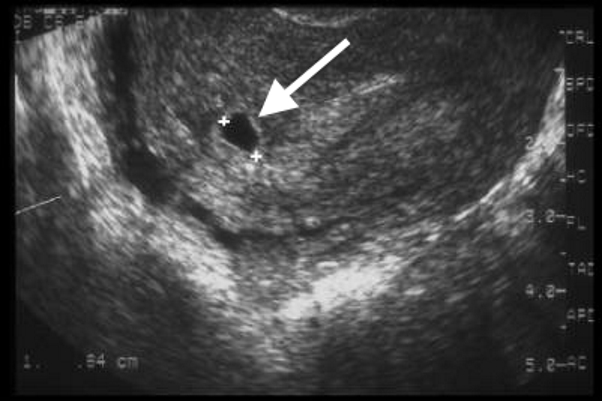 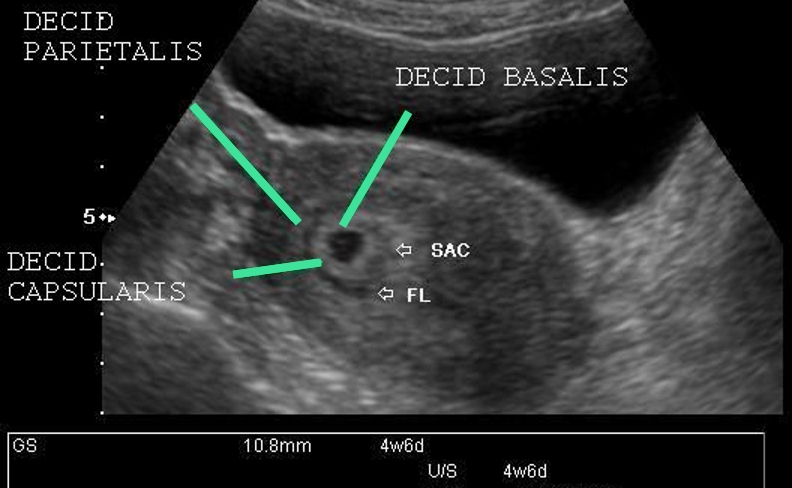 Figure 6. TVUS showing a thin film of fluid (FL) separating the decidua capsularis from the decidual parietalis and forming the double decidual sac. 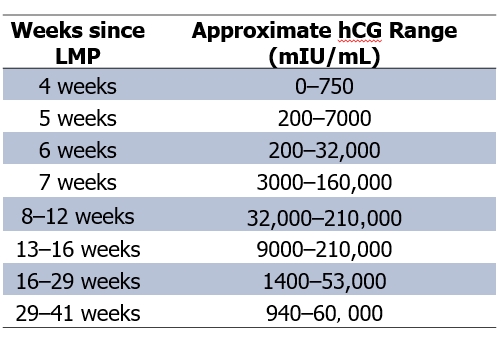 Figure 7. Range of normal beta HCG values at different stage of gestation. Not the increasing values occurring during the first trimester. 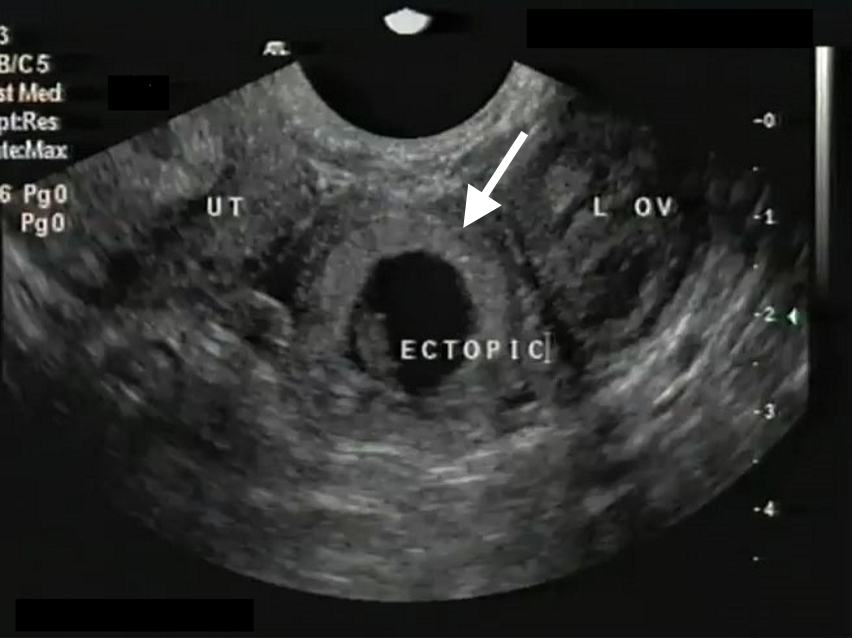 Figure 8. TVUS showing the uterus to the left (UT), left ovary to the right  (L OV) and an tubal ectopic gestation (Ectopic). Note the echogenic ring (arrow) surrounding the sac. 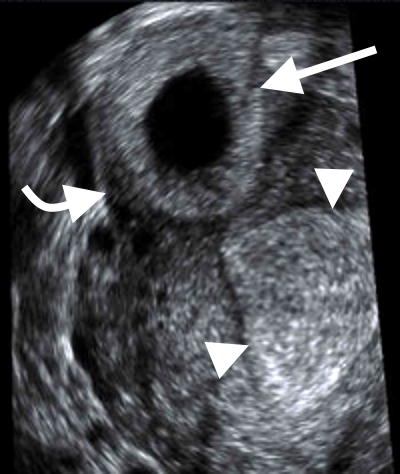 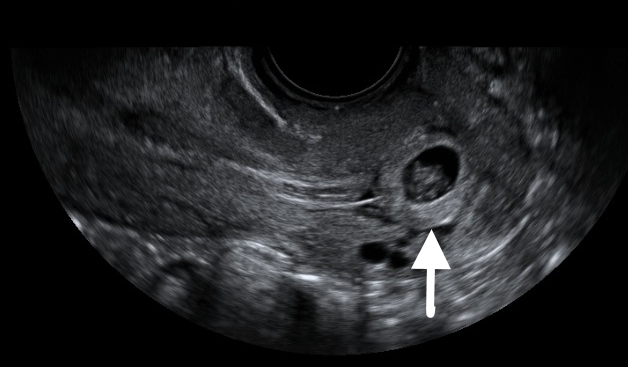 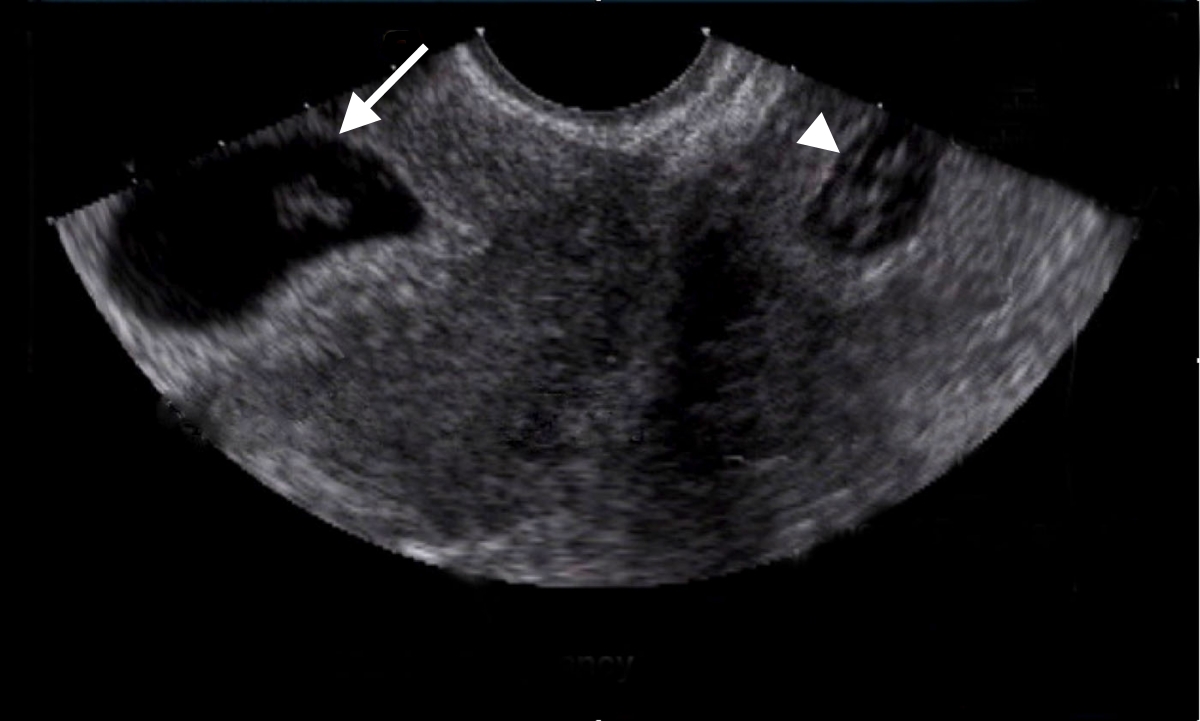 Editorial – Thou shalt NOT prescribe antibiotics …