Ligaments are similar to tendons in that they have an ordered lamellar arrangement of fibers and therefore appear fibrillar and hyperechoic on US. In skeletally immature patients, the ligaments insert into un-ossified bone, which is hypoechoic (Fig 1), while in skeletally mature individuals they insert into hyperechoic cortical bone (Fig 2).

Ligament tears appear as focal or diffuse areas of decreased echogenicity that disrupt the normal fibrillar pattern, or as discontinuity of the ligament. As with tendons, ligaments show anisotropy particularly close to their attachments that may lead to incorrect diagnosis. The most amenable ligaments on ultrasound are the extra-articular ligaments of the knee (medial and lateral collateral ligaments), the lateral ankle ligaments (particularly the anterior fibulo-talar ligament or ATFL) and the ulnar and radial collateral ligaments of the elbow and thumb.

The ATFL is best visualised in its longitudinal plane that runs from the anterior aspect of the tip of the fibula to the anterior portion of the talus (Fig 3). A tear of the ATFL can appear as loss of its fibrillar pattern, focal thinning of the ligament or a defect in the ligament (Fig 4); these features may become more evident when observed dynamically during the anterior drawer test or when compared with the contralateral normal ligament (Fig 5).

The ulnar collateral ligament (UCL) of the elbow is also well visualised by ultrasound. It has three components, the anterior, posterior and transverse bundles. The anterior bundle of the UCL is one of the main stabilising structure in the medial aspect of the elbow and is best imaged in its longitudinal course (Fig 6). A torn UCL (anterior bundle) usually results from forceful throwing as may occur in pitching (baseball) and may present with loss of the fibrillar pattern, focal thinning and as a defect in the substance of the ligament on US (Fig 7).

The UCL of the thumb is prone to injury during forced adduction as may occur during skiing injuries caused by the ski pole or by a fall on the extended thumb (Fig 8). Scanning along the longitudinal plane of the ligament will demonstrate the defect within the ligament, which is again more evident while dynamically scanning during forced thumb adduction (Fig 9). Scanning of the UCL of the thumb requires a special high resolution US probe frequently referred to as a hockey stick probe.

The medial and lateral collateral ligaments of the knee (MCL and LCL) (Fig 10) are prone to tears resulting from valgus/varus knee strain. Scanning in the longitudinal plain of the ligaments will best depict their integrity. Tears of the MCL or LCL appear as loss of the fibrillar pattern, focal hypo-echogenicity, ligament thinning or as a defect in the ligament (Fig 11).

The literature contains an ever-increasing list of ligamentous structures that are amenable to US evaluation. With the advent of high frequency ultrasound probes ranging up to 22MHz, tiny superficial ligaments can be assessed with accuracy often greater than is allowed by Magnetic Resonance Imaging. Such structures include the tiny ligaments and pulleys retaining the flexor tendons of the fingers as well as ligaments in the wrist and foot that are of vital importance to the stability and function of the related joints. The information delivered by US on ligamentous integrity is of vital importance when providing tailored treatment targeted towards obtaining the best functional outcome. 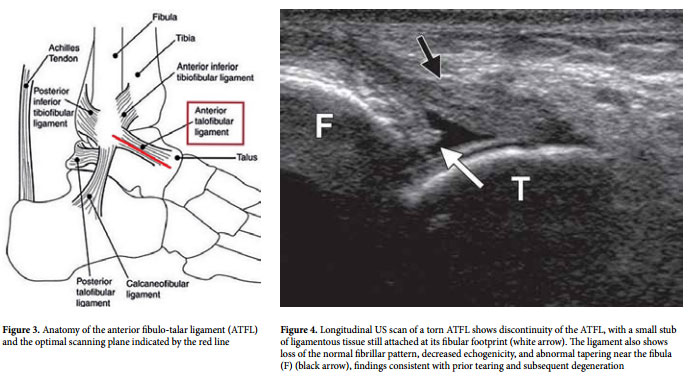 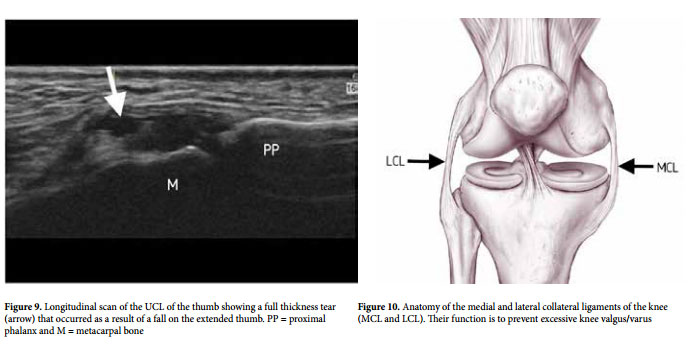 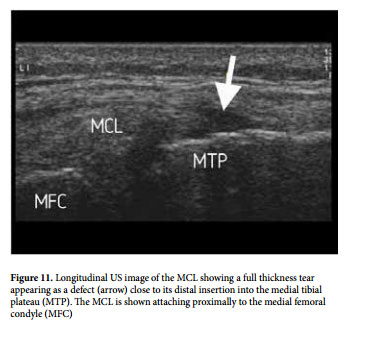 The Decline and Fall of the Sacra Infermeria

A Doctor of many Talents