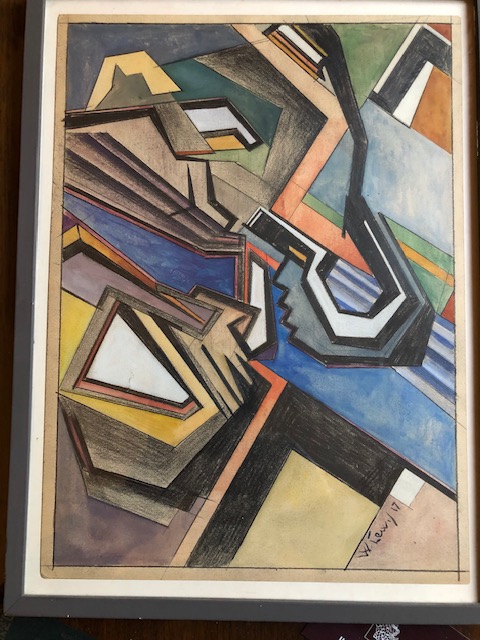 Percy Wyndham Lewis (18 November 1882 – 7 March 1957) was an English writer, painter, and critic. He was a co-founder of the Vorticist movement in art and edited BLAST, the literary magazine of the Vorticists.[1]

His novels include Tarr (1918) and The Human Age trilogy, composed of The Childermass (1928), Monstre Gai (1955) and Malign Fiesta (1955). A fourth volume, titled The Trial of Man, was unfinished at the time of his death. He also wrote two autobiographical volumes: Blasting and Bombardiering (1937) and Rude Assignment: A Narrative of my Career Up-to-Date (1950).

In 1908, Lewis moved to London, where he would reside for much of his life. In 1909, he published his first work, accounts of his travels in Brittany, in Ford Madox Ford‘s The English Review. He was a founding member of the Camden Town Group, which brought him into close contact with the Bloomsbury Group.

In 1912, Lewis exhibited his works at the second Postimpressionist exhibition: Cubo-Futurist illustrations to Timon of Athens and three major oil paintings. In 1912, he was commissioned to produce a decorative mural, a drop curtain, and more designs for The Cave of the Golden Calf, an avant-garde cabaret and nightclub on Heddon Street.[2][3]

From 1913 to 1915, Lewis developed the style of geometric abstraction for which he is best known today, which his friend Ezra Pound dubbed “Vorticism.” Lewis sought to combine the strong structure of Cubism, which he found was not “alive,” with the liveliness of Futurist art, which lacked structure. The combination was a strikingly dramatic critique of modernity. In his early visual works, Lewis may have been influenced by Bergson’s process philosophy. Though he was later savagely critical of Bergson, he admitted in a letter to Theodore Weiss (19 April 1949) that he “began by embracing his evolutionary system.” Nietzsche was an equally important influence.

He and several other Omega artists started a competing workshop called the Rebel Art Centre. The Centre operated for only four months, but it gave birth to the Vorticist group and its publication, BLAST.[4] In BLAST, Lewis formally expounded the Vorticist  aesthetic in a manifesto, distinguishing it from other avant-garde practices. He also wrote and published a play, Enemy of the Stars. It is a proto-absurdist, Expressionist drama. Lewis scholar Melania Terrazas identifies it as a precursor to the plays of Samuel Beckett.

In 1915, the Vorticists held their only U.K. exhibition before the movement broke up, largely as a result of World War I.  Lewis himself was posted to the western front and served as a second lieutenant in the Royal Artillery. Much of his time was spent in Forward Observation Posts looking down at apparently deserted German lines, registering targets and calling down fire from batteries massed around the rim of the Ypres Salient. He made vivid accounts of narrow misses and deadly artillery duels.

After the Third Battle of Ypres, Lewis was appointed as an official war artist for both the Canadian and British governments. For the British, he painted one of his best-known works, A Battery Shelled (1919), drawing on his own experience at Ypres. Lewis exhibited his war drawings and some other paintings of the war in an exhibition, “Guns”, in 1918.

Although the Vorticist group broke up after the war, Lewis’s patron, John Quinn, organized a Vorticist exhibition at the Penguin Club in New York in 1917. His first novel, Tarr, was serialized in The Egoist during 1916–17 and published in book form in 1918. It is widely regarded as one of the key modernist texts.[8]

Lewis later documented his experiences and opinions of this period of his life in the autobiographical Blasting and Bombardiering (1937), which covered his life up to 1926.

After the war, Lewis resumed his career as a painter with a major exhibition, Tyros and Portraits, in 1921. “Tyros” were satirical caricatures intended to comment on the culture of the “new epoch” that succeeded the First World War. A Reading of Ovid and Mr Wyndham Lewis as a Tyro are the only surviving oil paintings from this series. Lewis also launched his second magazine, The Tyro, of which there were only two issues. The second (1922) contained an important statement of Lewis’s visual aesthetic: “Essay on the Objective of Plastic Art in our Time”.[9] It was during the early 1920s that he perfected his incisive draughtsmanship.

By the late 1920s, he concentrated on writing. He launched yet another magazine, The Enemy (1927–1929), largely written by himself and declaring its belligerent critical stance in its title. The magazine and other theoretical and critical works he published from 1926–29 mark a deliberate separation from the avant-garde and his previous associates. He believed that their work failed to show sufficient critical awareness of those ideologies that worked against truly revolutionary change in the West, and therefore became a vehicle for these pernicious ideologies. His major theoretical and cultural statement from this period is The Art of Being Ruled (1926).

Time and Western Man (1927) is a cultural and philosophical discussion that includes penetrating critiques of James Joyce, Gertrude Stein and Ezra Pound that are still read.

In 1930 Lewis published The Apes of God, a biting satirical attack on the London literary scene, including a long chapter caricaturing the Sitwell family, which may have harmed his position in the literary world In 1937 he published The Revenge for Love, set in the period leading up to the Spanish Civil War and regarded by many as his best novel. It is strongly critical of communist activity in Spain and presents English intellectual fellow travellers as deluded.

Despite serious illness necessitating several operations, he was very productive as a critic and painter. He produced a book of poems, One-Way Song, in 1933, and a revised version of Enemy of the Stars. An important book of critical essays also belongs to this period: Men without Art (1934). It grew out of a defence of Lewis’s satirical practice in The Apes of God and puts forward a theory of ‘non-moral’, or metaphysical, satire. The book is probably best remembered for one of the first commentaries on Faulkner and a famous essay on Hemingway.

After becoming better known for his writing than his painting in the 1920s and early 1930s, he returned to more concentrated work on visual art, and paintings from the 1930s and 1940s constitute some of his best-known work. The Surrender of Barcelona (1936–37) makes a significant statement about the Spanish Civil War.   It was included in an exhibition at the Leicester Galleries in 1937 that Lewis hoped would re-establish his reputation as a painter. After the publication in The Times of a letter of support for the exhibition, asking that something from the show be purchased for the national collection (signed by, among others, Stephen Spender, W. H. Auden, Geoffrey Grigson, Rebecca West, Naomi Mitchison, Henry Moore and Eric Gill)   the Tate Gallery bought the painting, Red Scene. Like others from the exhibition, it shows an influence from Surrealism and de Chirico‘s Metaphysical Painting. Lewis was highly critical of the ideology of Surrealism, but admired the visual qualities of some Surrealist art.

By 1951, he was completely blinded by a pituitary tumor that placed pressure on his optic nerve. It ended his artistic career, but he continued writing until his death. He published several autobiographical and critical works: Rude Assignment (1950), Rotting Hill (1951), a collection of allegorical short stories about his life in “the capital of a dying empire”;[13][14] The Writer and the Absolute (1952), a book of essays on writers including George Orwell, Jean-Paul Sartre and André Malraux; and the semi-autobiographical novel Self Condemned (1954).

In 1931, after a visit to Berlin, Lewis published Hitler (1931), a book presenting Adolf Hitler as a “man of peace” whose party-members were threatened by communist street violence. His unpopularity among liberals and anti-fascists grew, especially after Hitler came to power in 1933. Following a second visit to Germany in 1937, Lewis changed his views and began to retract his previous political comments. he recognized the reality of Nazi treatment of Jews after a visit to Berlin in 1937. In 1939, he published an attack on anti-semitism, The Jews, Are They Human?,   which was favorably reviewed in The Jewish Chronicle. He also published The Hitler Cult (1939), which firmly revoked his earlier support for Hitler.

Politically, Lewis remained an isolated figure through the 1930s. In Letter to Lord Byron, W. H. Auden called Lewis “that lonely old volcano of the Right.” Lewis thought there was what he called a “left-wing orthodoxy” in Britain in the 1930s. He believed it was against Britain’s self-interest to ally with the Soviet Union, “which the newspapers most of us read tell us has slaughtered out-of-hand, only a few years ago, millions of its better fed citizens, as well as its whole imperial family.”

In Anglosaxony: A League that Works (1941), Lewis reflected on his earlier support for fascism:

Fascism – once I understood it – left me colder than communism. The latter at least pretended, at the start, to have something to do with helping the helpless and making the world a more decent and sensible place. It does start from the human being and his suffering. Whereas fascism glorifies bloodshed and preaches that man should model himself upon the wolf.

His sense that America and Canada lacked a British-type class structure had increased his opinion of liberal democracy, and in the same pamphlet, Lewis defends liberal democracy’s respect for individual freedom against its critics on both the left and right.[12] In America and Cosmic Man (1949), Lewis argued that Franklin Delano Roosevelt had successfully managed to reconcile individual rights with the demands of the state. 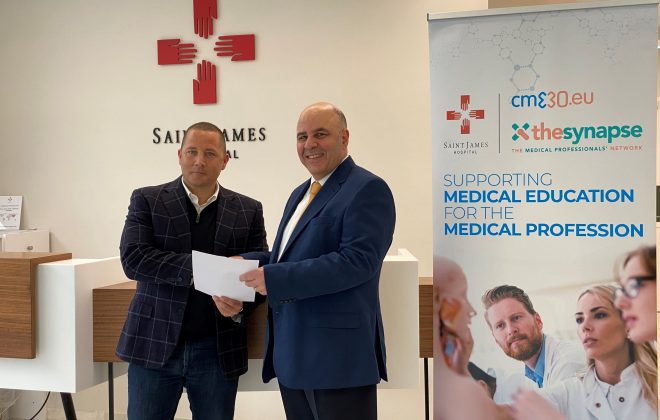 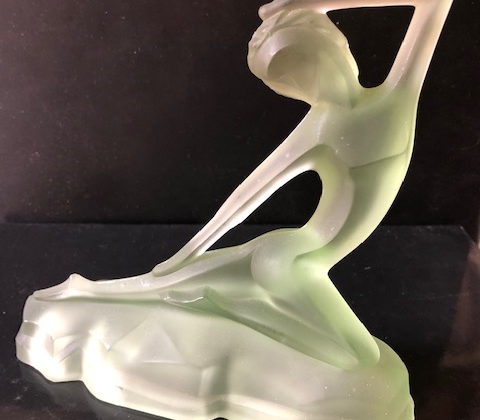