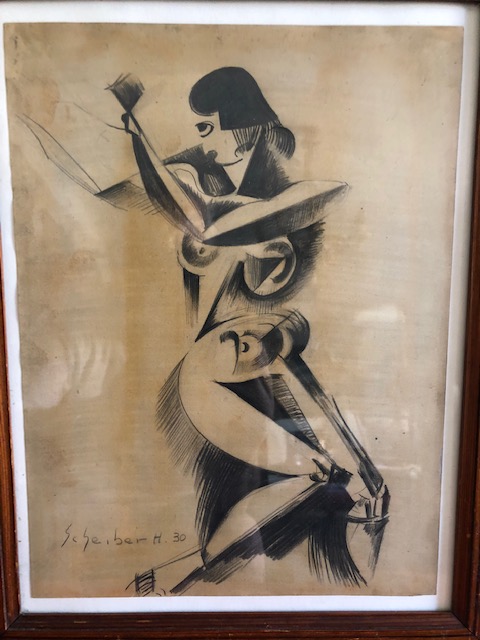 Hugó Scheiber ( Budapest 1873 – Budapest  1950 ), at fifteen old, in Budapest, he  began working during the day to help support the family  and attending painting classes at the School of Design in the evening, where Henrik Papp was one of his teachers.

He completed his studies in 1900. His work was at first in a post-Impressionistic style but from 1910 onward showed  his increasing  interest  in German  Expressionism and Futurism. This made it of little interest to the conservative Hungarian art establishment.

However, in 1915,  he met the great Italian  avant-gardist  Filippo Tommaso Marinetti and  the  two painters  became  close friends.  Marinetti invited him to join the Futurist Movement. The uniquely modernist style that he developed was, however, closer to German Expressionism than to Futurism and eventually drifted toward  an international  art  deco manner similar to Erté‘s.   In 1919, he and his friend Béla Kádar  held an exhibition at the Hevesy Salon in Vienna. It was a great success and  at last caused the Budapest Art Museum to acquire some of Scheiber’s drawings. Encouraged, Scheiber came back to live in Vienna in 1920.

A turning point in Scheiber’s career came a year later, when Herwarth Walden, founder of  Germany’s  leading  avant-garde  periodical,  Der Sturm,  and of the Sturm Gallery in Berlin,  became interested  in Scheiber’s work.  Scheiber  moved to Berlin in 1922, and his paintings soon appeared regularly in Walden’s magazine and elsewhere. Exhibitions of his works followed in London, Rome, La Paz, and New York.

Scheiber’s move  to Germany coincided with a significant exodus  of Hungarian artists to Berlin, including László Moholy-Nagy and Sándor Bortnyik. There had been a  major split in  ideology among  the Hungarian avant-garde. The Constructivist  and  leader  of  the Hungarian  avantgarde,  Lajos Kassák  (painted by Hugó Scheiber in 1930) believed that art should relate to all the needs of contemporary humankind.   Thus,  he refused  to compromise  the purity of his style to reflect the demands of either the ruling class or socialists and communists. The other camp believed that an artist should be a figurehead for social and political change.

The fall out and factions that resulted  from this  politicisation resulted  in  most of the Hungarian avantgardists  leaving Vienna for Berlin.  Hungarian  émigrés made up one of the largest minority groups in the German capital and the influx of their painters  had  a significant  effect on Hungarian  and international art.  Apart  from the political activists,  there were independent Modernists such as Scheiber and Kádár,  who hoped  to find fertile  ground for their aesthetic and social idealism. Hugó Scheiber,  among others,  suddenly  found  himself  in the upper echelons of  the dynamic  Berlin  art world.   Another  turning  point  of  Scheiber’s career came in 1926, with the New York exhibition of the Société Anonyme.   Scheiber and other important  avantgarde  artists from more than twenty-three countries were represented.  In 1933, Scheiber was invited  by Marinetti  to participate in the great meeting of the Futurists held in Rome in late April 1933, Mostra Nazionale d’Arte Futurista  where he  was received with great enthusiasm. Gradually, the Hungarian artists began to return home, particularly with the rise of Nazism in Germany. Kádar went back from Berlin in about 1932 and Scheiber followed in 1934.

He was then at the peak of his powers and had a special flair in depicting café and cabaret  life in vivid colors, sturdily abstracted  forms and spontaneous brush strokes. Scheiber depicted cosmopolitan modern life using stylized shapes and expressive colors. His preferred subjects were cabaret and street scenes, jazz musicians, flappers, and a series of self-portraits (usually with a cigar). A highly prolific workman, he produced well over 1500 works, his principal  media  being gouache  and oil. He was a member of the prestigious New Society of Artists (KUT—Képzőművészek Új Társasága) and seems to have  weathered  Hungary’s post–World War II transition to state-communism  without difficulty. He continued to be well regarded, eventually even receiving the posthumous honor of having one of his images used for a Soviet postage stamp. 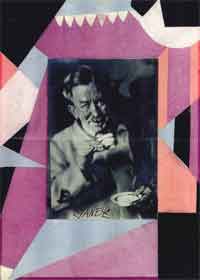 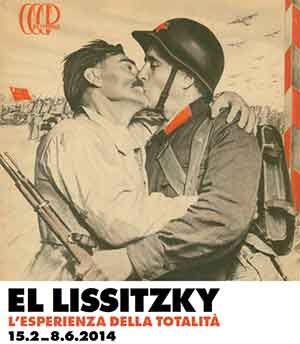 El Lissitzky – The experience of totality