A number of anatomic variants and pathologic conditions in and around the pancreas may simulate primary pancreatic cancer on routine abdominal cross-sectional imaging. An ambiguous lesion whose appearance suggests a pancreatic origin requires a broad differential diagnosis that can subsequently be narrowed on the basis of both clinical history and features at optimal computed tomography (CT) and magnetic resonance (MR) imaging. Recently introduced curved planar reconstruction techniques used with CT and MR studies, may help avoid potential diagnostic pitfalls. These techniques can help identify and characterize a mass in multiple viewing planes, thereby helping distinguish a true pancreatic neoplasm from peripancreatic enlarged lymph nodes or from a tumor of the adjacent small bowel. The correct localisation of a lesion would guide lesion-specific work-up and treatment and may avoid unnecessary tests or procedures, including surgery.

Although there are various modalities for imaging the pancreas, spiral CT is by far the most useful technique use to assess the structure of the pancreas and its anatomical relationship to surrounding structures. MR and Ultrasound (US) are also useful, with the former serving mostly as a secondary investigation when additional information is deemed necessary. US does not usually visualise the whole pancreas, but may be used particularly for lesions of the pancreatic head and when vascular abnormalities are suspected.

Normal anatomic structures and congenital anomalies of the foregut are common entities that may simulate primary pancreatic cancer. The normal fourth portion of the duodenum or proximal jejunum borders the pancreatic tail and unopacified adjacent bowel (Fig 1  ) or an undistended gastric fundus may simulate a mass. Such cases can be easily clarified with the use of oral contrast material at CT. Variations in the lateral contour of the pancreatic head and neck are common and may also mimic pancreatic masses. Anatomic distortions from prior surgery, including nephrectomy, Whipple procedure, and Puestow procedure 1 (Fig 2), may also appear as pancreatic masses due to unopacified afferent loops or pancreatic displacement.

Pancreas divisum (Fig 3) results from aberrant fusion of the embryologic dorsal and ventral pancreatic ducts, and is the most common congenital anatomic variant of the pancreas, with a prevalence approaching 10% in the general population. Its clinical relevance is most often discussed in the context of recurrent pancreatitis; rarely, however, it may cause enlargement of the pancreatic head and be mistaken for a mass.

Annular pancreas is the second most common congenital pancreatic anomaly and results in pancreatic tissue partially or completely encircling the second part of the duodenum (Fig 4). A diagnosis of annular pancreas may be suspected if barium studies show narrowing of the duodenum at the level of the major papilla. Endoscopic retrograde cholangio-pancreatography (ERCP) or noninvasive MR cholangiopancreatography can be performed to delineate the pancreatic duct encircling the duodenum.

Duodenal duplications (Fig 5 ) and diverticula may also be misinterpreted as pancreatic masses at CT or MR imaging. Duplications are usually noncommunicating and are most often located on the mesenteric side of the second and third portions of the duodenum. Affected patients typically present with symptoms of intestinal obstruction but may also develop biliary obstruction and pancreatitis. At barium examination, the duodenum usually appears compressed by an external mass along its mesenteric border. CT scan the duplication appears as a smoothly rounded, fluid-filled cyst located in or adjacent to the wall. Duodenal diverticula may be of either the congenital intraluminal or, more commonly, the acquired extrinsic pulsion type. Most intraluminal diverticula are found within the second portion of the duodenum appearing as a contrast material–filled pouch projecting into the true lumen.

Splenic variants, such as accessory spleens or splenosis, may also mimic a pancreatic mass (Fig 6 ). Accessory spleens occur in approximately 10% of the population, and intrapancreatic accessory spleens are found in the pancreatic tail in roughly 16% of these patients. Imaging with reticulo-endothelial system targeted contrast agents may be used to differentiate splenic from pancreatic tissue. These include technetium 99m (99mTc) sulfur colloid scintigraphy or MRI enhanced with iron oxide tagged particles (SPIO –superparamagnetic particulate iron oxide).

Choledochal cysts are rare congenital malformations of the bile duct that usually manifest in infancy and childhood. They appear as cystic or fusiform dilatation of the extrahepatic biliary tree and may simulate a cystic mass in the head of the pancreas (Fig 7 ). MR cholangiopancreatography (MRCP) allows confirmation of the diagnosis and noninvasive delineation of the anatomy. Biliary contrast-enhanced CT or MR imaging may also be used for this purpose.

Chronic pancreatitis can be associated with a range of anatomic abnormalities of the pancreas, including pancreatic atrophy or enlargement and ductal dilatation. When enlargement is focal with parenchymal changes due to chronic inflammation, it may be virtually indistinguishable from adenocarcinoma on the basis of morphologic features or enhancement pattern at MR imaging and CT (Fig 8 ). Clinical and imaging follow-up findings usually confirm this diagnosis.

Although autoimmune pancreatitis typically manifests with diffuse pancreatic enlargement, the focal type may manifest as a distinct mass in the pancreatic head (Fig 8  ). In the context of a coexisting autoimmune disease such as primary sclerosing cholangitis or ulcerative colitis, suspecting this diagnosis will help avoid unnecessary surgical intervention.

Certain nodal chains, when involved in neoplastic, inflammatory, or infectious disorders resulting in lymphadenopathy, may mimic lesions of the pancreas. Bulky lymphadenopathy due to lymphoma, usually non-Hodgkin B-cell type (Fig 10) or metastatic disease from a variety of primary malignancies such as those occurring the esophagus, stomach, colon, breast, adrenal gland, and kidney may manifest with lymph node involvement , that can mimic a pancreatic carcinoma. Inflammatory disorders associated with lymphadenopathy include granulomatous disorders such as sarcoidosis and angioproliferative disorders such as Castleman disease. Although nonspecific, sarcoidosis may be diagnosed if concomitant lesions are present in the liver or spleen and the typical perihilar and paratracheal adenopathy or parenchymal lung changes are present. Castleman disease may sometimes manifest with variably but intensely enhancing adenopathy. Tuberculosis of the pancreas and peripancreatic lymph nodes, although rare, may also mimic a tumor of the pancreatic head.

Abnormalities such as aberrant vessels or pseudoaneurysms (Fig 11) secondary to complicated pancreatitis or vascular surgical anastomoses may mimic a pancreatic mass. Pseudoaneurysms complicate 10% of cases of acute pancreatitis, most commonly affecting the splenic artery.  Colour Doppler US will clear demonstrate the extent of such an aneurysm and the presence of thrombus within it. A thrombosed distended portal vein may also mimic a pancreatic neoplasm and is well characterised by Colour Doppler US.

Primary retroperitoneal processes such as a hematoma, fibrosis, or neoplasms may mimic a pancreatic mass (Fig 12). Some mesenteric processes (eg, retractile mesenteritis) or masses (eg, carcinoid tumors, desmoid tumors, sclerosing mesenteritis) may pose diagnostic difficulty unless a clear plane of separation is identified.

Metastatic lesions to the pancreas are found at 3%–12% of autopsies performed in patients who died of advanced malignancies, and most patients with metastatic pancreatic lesions also had extrapancreatic metastatic disease. Primary tumors that commonly metastasize to the pancreas include those involving the lung, gastrointestinal tract, breast, and kidney, melanoma, lymphoma, and (osteo)sarcoma  . The use of US- or CT-guided fine-needle biopsy for the diagnosis of lesions prompts appropriate clinical studies and treatment whilst avoiding open pancreatic biopsy.

Focal pancreatitis may be the result of abnormal sensitivity to certain pharmaceuticals (eg Protease Inhibitors).

We have discussed a variety of anatomic variants and diseases in and around the pancreas that simulate primary pancreatic tumours. Knowledge of these variants and disease entities is important for initiating the appropriate work-up while avoiding unnecessary tests or procedures. Advanced CT and MR imaging techniques and in selected cases US can greatly improve the ability to identify pancreatic malignancies.

1 The Puestow procedure involves creating a longitudinal incision along the pancreas which opens the main pancreatic duct longitudinally from the head of the organ to its tail  followed by anastomosis with a loop of the small intestine (pancreatico-jejunostomy) oversewn to the exposed pancreatic duct to allow drainage. 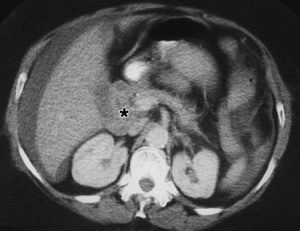 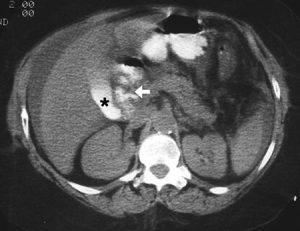 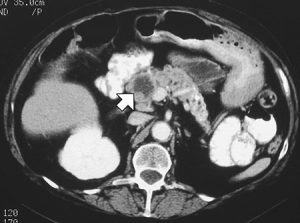 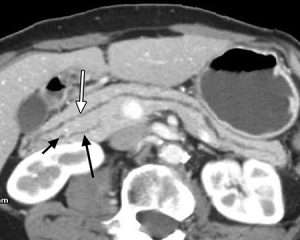 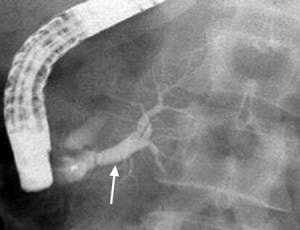 Figure 3b. ERCP shows contrast material injected through the major papilla filling the dilated ventral duct (arrow), which branches and tapers within the head of the gland and does not communicate with the dorsal duct 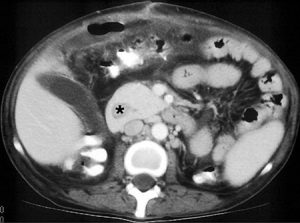 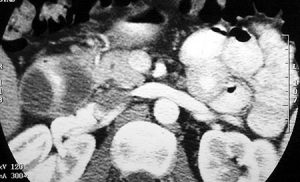 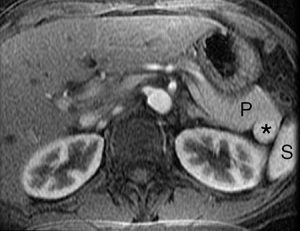 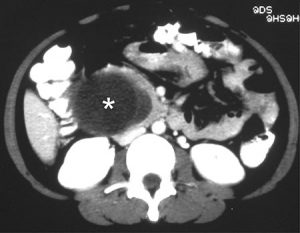 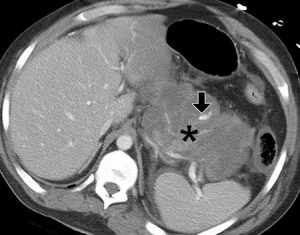 Figure 8. CT scan demonstrates hemorrhagic pancreatitis as a heterogeneous mass in the area of the pancreatic bed (*) that mimics a pancreatic tumor. Arrow indicates active haemorrhage. 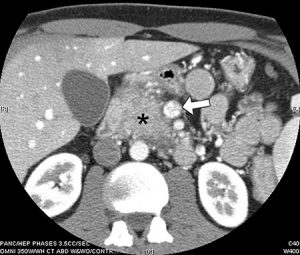 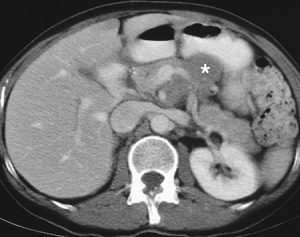 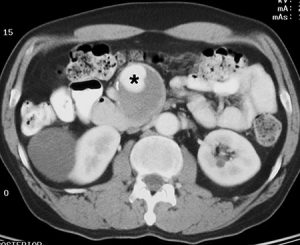 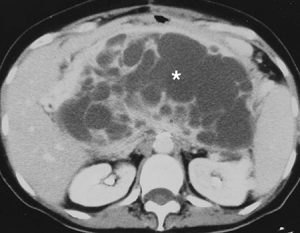 Figure 12.  A retroperitoneal fibrohistiocytoma (*) mimicking a pancreatic mass on CT scan; this was initially diagnosed as a mucinous adenocarcinoma of the pancreas.

The Genetics of the Muscular Dystrophies

Philosophy of medicine – is there such a thing?