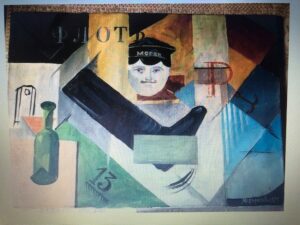 Aleksei Alekseevich Morgunov ( 21 October 1884, Moscow – 15 February 1935, Moscow) was a Russian Avant-Garde painter.   His works were originally in the Neo-Primitivist style, but became influenced by  Fauvism Together with Kazimir Malevich and Ivan Kliun, he created a style known as “Februaryism”. He later took up Neo-Classicism, then was forced to adopt the Socialist Realism model.

From 1909 to 1910, he travelled throughout Western Europe and came under the influence of Impressionism from Natalia Goncharova and Mikhail Larionov

Upon returning, he established  an informal workshop which  became a  meeting place for left-wing artists. He also associated with a group of radical artists led by Mikhail Larionov  and participated in his ground-breaking  exhibition called the “Jack of Diamonds“. He also exhibited with Larionov’s even more radical group called the Donkey’s Tail in 1912. By 1914, he had begun to move in other directions.

After that time, he became an associate of Kazimir Malevich.   Together with Ivan Kliun, they created their own short-lived movement called “Fevrialism” (Februaryism), following a rather impolite debate at the Polytechnic Museum, in February.    They were also known as the “spoons” because they wore spoons in their buttonholes. He did not, however, stay with Malevich after the creation of the Suprematist movement. This was at a time when many of his personal relationships were beginning to suffer from his alcoholism.

He dropped out of the art community for a few years,  returning during the early Soviet period. After the 1917 October Revolution by 1918, he was a member of the College of Fine Arts; a division of the People’s Commissariat for Education (Narkompros). From 1920 to 1921, he worked for their procurement and tariff commission. For some of those years, he also served as a teacher at his alma mater, the Stroganov Academy (then known as the “First Free State Art Workshops”) and participated in “Proletkult“.   He eventually adopted the requisite style of Socialist Realism. In the 1930s, several of his paintings were reproduced as postcards.     Thanks to the collector, George Costakis, some of his Fevrialist works may be seen at the Museum of Modern Art in Thessaloniki. 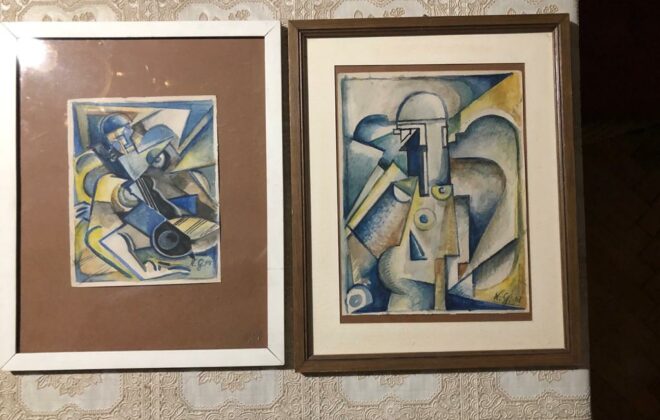