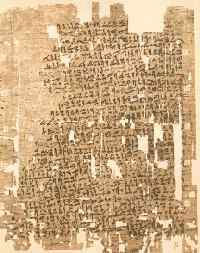 The Kahun Papyrus was discovered by Flinders Petrie in 1889 at the Fayum site of Lahun and was eventually deposited in the London University College. The papyrus is dated to this period by a note on the recto which states the date as being the 29th  year of the reign of Amenenhat III (c. 1825 BC). The text was published in facsimile, with hieroglyphic transcription and translation into English, by Griffith in 1898. It is badly fragmented. The textual material is similar in style to the Edwin Smith Papyrus but deals mainly with gynaecological matters and other problems affecting women. The gynecological text can be divided into thirty-four paragraphs, of which the first seventeen have a common format. The first seventeen start with a title and are followed by a brief description of the symptoms, usually, though not always, dealing with the reproductive organs. The second section begins on the third page, and comprises eight paragraphs which, because of both the state of the extant copy and the language, are almost unintelligible. Despite this, there are some paragraphs that have a sufficiently clear level of language as well as being intact which can be understood. Paragraph 19 is concerned with the recognition of who will give birth, paragraph 20 is concerned with the fumigation procedure which causes conception to occur and paragraphs 20-22 are concerned with contraception. Among those materials prescribed for contraception are crocodile dung, 45ml of honey and sour milk. The third section (paragraphs 26-32) is concerned with the testing for pregnancy. These include the placing of an onion bulb deep in the patient’s flesh, with the positive outcome being determined by the odor appearing to the patient’s nose. The fourth and final section contains two paragraphs which do not fall into any of the previous categories. The first prescribes treatment for toothaches during pregnancy. The second describes what appears to be a fistula between bladder and vagina with incontinence of urine “in an irksome place.” [The transcribed text at http://www.reshafim.org.il/ad/egypt/timelines/topics/kahunpapyrus.htm].

The Hearst Papyrus was given in 1901 to the expedition carried out by the University of California in Egypt by a peasant, in exchange for some waste soil he required as fertilizer. It is named after William Randolph Hearst, who funded much of the work of the expedition. The papyrus dates from the reign of Tuthmosis III in the 18th Dynasty in the first half of the second millennium BC. It consists of 18 pages with 260 paragraphs with hieratic Egyptian writing (a cursive form of hieroglyphic writing). Eighteen columns deal with medical prescriptions which concentrate on ailments of the urinary system, blood and hair, and bites. The ailments for which cures are offered range from “a tooth which falls out” (Col. I, l. 7) and “remedy for treatment of the lung” (Col. IV, l. 8) to bites by human beings (Col. II, ll. 6–7) pigs and hippopotami (Col. XVI, ll. 5–7). [The transcribed text can be seen at http://www.reshafim.org.il/ad/egypt/timelines/topics/hearstpapyrus.htm].

The Chester Beatty Papyri was one of a series of 19 papyri donated to the British Museum by the millionaire industrialist Sir Alfred Chester Beatty. These papyri were found in the workers village at Deir el-Medina in 1928. These papyri, together with many others now dispersed in various libraries were the private collection of the scribe Qen-her-khepeshef who lived in the 19th Dynasty and which were passed on down through his family until they were placed in a tomb. These papyri have undergone extensive reconstruction and translated into English by Gardiner in 1935. Their content comprises many magical incantations against headaches, but there is much space given over to vague rectal ailments with various remedies and incantations.

The Berlin Papyrus was acquired by Giuseppe Passalacqua in Sakkara and was sold on to Friedrich Wilhelm IV of Prussia with other objects in 1827 for the Berlin Museum. It was originally translated into German by Wreszinski in 1909. The style suggests a 19th Dynasty origin. It is made up of  24 pages – 21 verso and 3 retro – and its content is similar to the Ebers papyrus.

The London Medical Papyrus was passed on to the British Museum in 1860 having been in the possession of the Royal Institute of London prior to that. Its style dates it to the reign of Tutankhamun. It comprises 19 pages but is in very poor condition. It concentrates mostly on magical spells.

The Ramesseum Papyri was discovered in the great temple of the Ramesseum. This group of 17 papyri are believed to date to the 13th Dynasty (Early Second Intermediate Period). The main medical content is concentrated in Parts III, IV and V, all written in vertical columns. These sections discuss diseases of the eyes, gynaecological conditions, diseases affecting children and those affecting muscles and tendons.

The Carlsberg Papyrus is the property of the Carlsberg Foundation and is housed in the Egyptological Institute of the University of Copenhagen. Its style dates it to the 19th/20th Dynasties. It deals mainly with eye disease and pregnancy; and bears similarities to the Kahun and Berlin papyri.

The Brooklyn Papyrus is housed in the Brooklyn Museum. The style relates this to the Ebers Papyrus and has been dated to the 30th Dynasty or Early Ptolemic Period. It discusses various remedies to drive out the poison from snakes, scorpions and tarantulas.

The above-mentioned contemporary medical texts have furnished an extensive insight into the medical practice and knowledge of the Ancient Egyptians. Other textual information has also been gleaned from inscribed text found on sculptured reliefs and on pieces of pottery and ostraca, particularly from those dating from the Amarna Period to the time of Roman occupation. An example of such fragmentary textual sources is a little pink pot bears the following hieratic inscription: which, read from right to left, means: “Saw dust, acacia leaves, galena, goose fat. Bandage with it.” 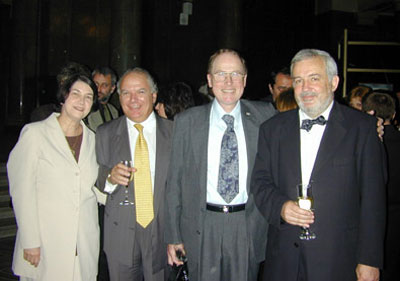 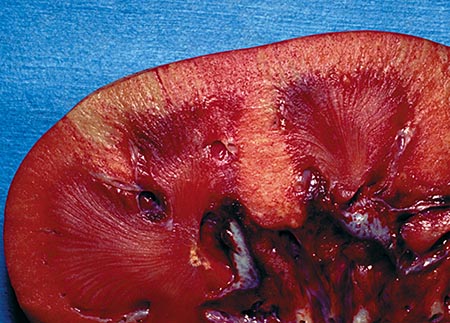